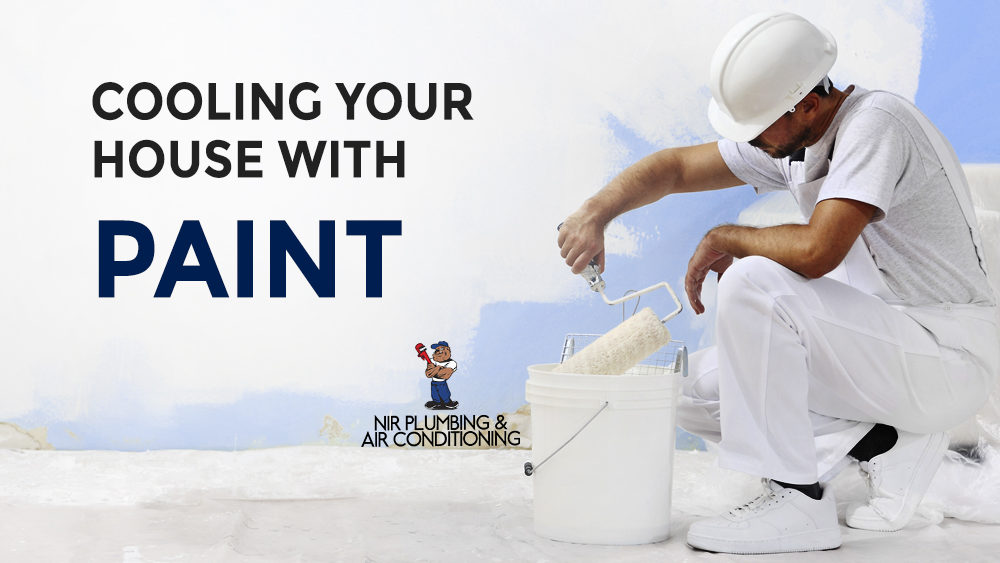 How to keep your house cool with heat-reflecting paint

If you’re a homeowner, learn how innovative heat-reflecting paint is used to cool homes

If you’re looking for a more green open, let’s revisit one of the oldest house-cooling tricks in the book: The white paint. But we’re adding a modern twist: UV rejecting additives.

White paint has been manufactured, which is beyond the known limits of whiteness. It is so reflective that if a building is painted with it, the need for air conditioning may reduce, according to Purdue University engineers.

THE RELATIONSHIP BETWEEN COLORS AND COOLING

If you’ve ever been recommended to wear lighter colors such as white during the summer months, you’re already familiar with the relationship between colors and cooling.

Since light colors reflect heat and dark colors absorb heat, it’s often recommended that we stick to light colors — whether painting a room or dressing up — to keep things cooler. That’s why people avoid wearing all black if they want to stay cool. Similar goes for light colored walls.

Better insulation and cooling properties will help keep your home cooler in extreme heat, and paint is one of those cooling options.

“SMART” PAINT COLORS ARE BEING ENGINEERED TO COOL HOMES

What the world needs now is to cool off (we’ve hit an unprecedented point in global warming), and a new white paint developed by engineers at Purdue University could help.

The engineers at Purdue University have developed a paint that reflects 95.5 percent of sunlight.

It’s said to keep surfaces “up to 18 degrees Fahrenheit cooler than their ambient surroundings,” said Purdue in a statement this week. That’s something commercial heat-reflecting white paints haven’t been able to achieve.

The paint uses a process called radiative cooling, in which an object loses heat through thermal radiation, even in direct sunlight.

It was a multi-year process (six years, to be exact) involving a lot of testing of different paint formulations.

The six-year study builds on attempts going back to the 1970s to develop radiative cooling paint as a feasible alternative to traditional air conditioners.

To make their ultra-white paint, the team of engineers considered over 100 different materials before shortlisting 10. For each of those, they went through approximately 50 different formulations.

They eventually picked a chemical compound called calcium carbonate (a compound found in chalk, limestone and seashells) as a main ingredient.

This compound, used as the paint’s filler, allowed the formulation to behave essentially the same as commercial white paint but with greatly enhanced cooling properties.

These calcium carbonate fillers absorb almost no ultraviolet rays due to a so-called large “band gap,” a result of their atomic structure.

They also have a high concentration of particles of different sizes, allowing the paint to scatter a wider range of wavelengths.

According to the researchers, the paint would replace the need for air conditioning by absorbing nearly no solar energy and sending heat away from the building.

Without the building heating up, air conditioning wouldn’t have to kick on. So the engineers are looking ahead to a future where the paint could be applied to houses, roofs, cars and even roads. It could also help reduce the demand for energy-hungry air conditioning in buildings.

More information about what the engineers are doing with the paint can be found here and here.

Researchers from Columbia University — who have also developed cooling paint — say that the coating is easy to apply, essentially working like a standard paint. It can be used on almost any surface, from rooftops to water tanks to vehicles.

The Columbia team also experimented with making the coating in different colors, in the hopes of making the product appeal to a wider audience. Adding color does lower the degree of cooling, but the performance is still better than colored commercial paint.

HOW YOU CAN COOL YOUR HOME USING PAINT

The thing about air conditioners is that they kick on mainly due to sunlight heating up the roof and walls and making the inside of your house feel warmer. And, according to coauthor Joseph Peoples, a PhD student in mechanical engineering, the cooling paint is basically creating free air conditioning by reflecting that sunlight and offsetting those heat gains from inside your house.

This leads peole to ask an important question:

I have heard about house and wall paint that can keep my house cooler in the summer and warmer in the winter. Do these paints really work, can I apply the paint myself and are they very expensive? [Source: Deseret News]

The answer to the first two questions is yes. You can apply the paint like any other wall or exterior house paint. It is also extremely effective for painting your roof to extend its life and block the heat

Other than a very slightly textured surface, that you would not notice unless it was called to your attention, these paints look like ordinary wall paint when dry. It is available in many standard and custom colors.

You can buy powdered additives to mix into any house paint. Doing this will give your paint the ability to reflect UV while also insulating your home.

You can also buy preformulated heat-rejecting paint. The idea is the same: Bounce back the sun’s UV rays better than white paint alone to prevent the underlying walls from heating up and transferring that heat to the interior of your home.

“Cutting down on air conditioning also means using less energy from coal, which could lead to reduced carbon dioxide emissions,” Peoples says in that same article.

OTHER TECHNOLOGY BEING CREATED FOR COOLING

Smart paint isn’t the only technology that’s currently being developed to harness the process. Stanford University researchers were developing “anti-solar panels” that used radiative cooling to generate energy at nighttime.

Another development by a global group of researchers sees “cold tubes” cool down indoor spaces via radiative cooling, reducing the need for air conditioning systems and allowing users to keep their windows open on hot summer days.

Researchers at Columbia University are also interested in developing water or alcohol-based systems to make coatings with similar cooling performances, which could make the product more eco-friendly and easy to apply. They’re also looking at new ways to recycle discarded polymers.

For more information about these cooling projects, click here and here.