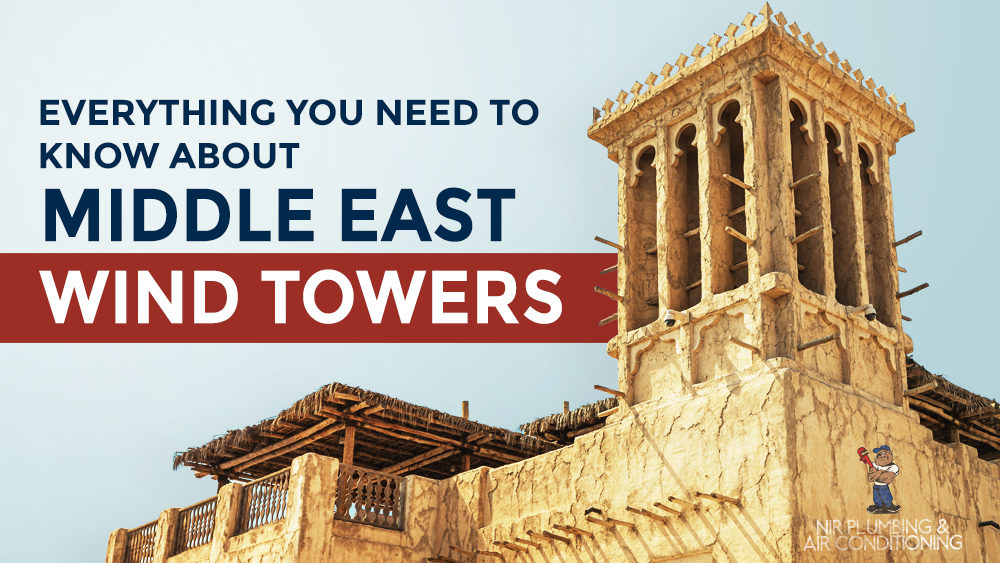 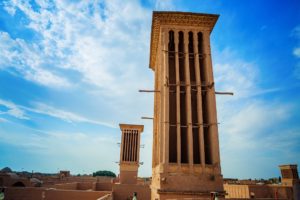 One of the most unique ancient cooling systems is the windcatcher, or wind tower. The “windcatcher” moniker comes from their ability to catch passing winds and drive them down into buildings below.

This traditional architectural element was the natural air cooling system before the air conditioner existed. Though it functions pretty much like modern air conditioning system, it’s design is wildly different than the ACs we’re familiar with today.

THE ORIGIN OF THE WIND CATCHER

From ancient Persians and Egyptians to Babylonians and Arabs, civilizations have strived to adapt their architecture to the harsh, hot climates of their environments by developing natural ventilation methods.

TL;DR: Nobody knows for sure and the dispute between Iran and Egypt is still going as strong as the desert winds.

Meanwhile, ruins of a Persian fire temple dating to 4000BC feature numerous chimney-like structures, some of which have no trace of ashes, leading Iranian architects to postulate that wind catchers originated in Iran.

ENGINEERING SPECS OF THE WINDCATCHER

In short, windcatchers provide passive ventilation for indoor spaces. They can also facilitate evaporative cooling with the help of water reservoirs inside buildings. Sometimes, they are pointed into the wind to catch more air. In other cases, they face away from potential sandstorms.

In general, the windcatcher functions on these several principles:

Windcatchers are tall, chimney-like structures that protrude from the rooftops of older houses across North Africa and West Asia.

In their simplest form, wind catchers harness the cool breezes and redirect them downwards either into the home or into underground storage rooms to refrigerate perishable foods.

Studies have shown that wind catchers can reduce indoor temperatures by around 10 degrees. But since wind catchers are located at the highest point of a building, they are especially susceptible to deterioration and decay.

Related reading(s): An ancient engineering feat that harnessed the wind

Windcatchers vary in shape depending on the location, direction of the wind in the area, and surrounding geography.

Places that are surrounded by mountains means that desert winds are blocked so wind towers can be designed with different shapes and more inlets. In one particular place, the residential buildings of Yazd in Iran, most of the windcatchers are rectangular in shape, with inlets on each of the four sides to catch wind blowing from multiple directions. However, hexagonal and octagonal wind catchers are also common in that area.

Some wind catchers are multi-directional if the area has winds coming from all directions. In other places, wind catchers would have only one inlet to prevent harsh, dusty, desert winds from entering the houses.

Even in the absence of a breeze, wind catchers work as solar chimneys.

Windcatchers are so effective that they are routinely used as a refrigerating device, in the form of ice houses in many parts in Iran. Many traditional water reservoirs (ab anbars) are built with wind catchers that are capable of storing water at near freezing temperatures for months in summer.

They create a pressure gradient that pushes warm air up and out through the tower, leaving the interior of the home feeling cooler than the exterior. Often the cool air from the wind catcher passes through an alcove in a room on the ground level, down through a vent into the zir-zamin (basement), where perishable goods are stored.

However, conventional and traditional wind towers have several limitations. Some of these limitations are:

WIND TOWERS AND MODERN USE

In today’s world, the significance of energy and energy conservation is a common knowledge. It’s no surprise, then, that engineers are now looking at this functional architecture as a way of providing zero-energy cooling for contemporary buildings, not just in the Arab peninsula but around the world. Wind towers can save the electrical energy used to provide thermal comfort during the warm months of the year, especially during the peak hours.

Related reading(s): A new design of wind tower for passive ventilation in buildings to reduce energy consumption in windy regions; Can wind towers take the heat off UAE’s air-con addiction?